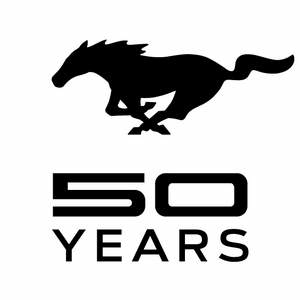 BRIGHTON, Mich.- Are you sick of the constant coverage of the next generation Ford Mustang? Neither are we! Yesterday we got our hands on some leaked photos of clay models that are rumored to be the 2015 Ford Mustang. Today, we've got news about the recently Revealed Ford Mustang 50th Anniversary Logo! It's no secret that Ford Motor Company has special plans in the works for the pony's big anniversary, but the vehicle's revised design however, is still a massive secret! Perhaps the best kept secret in the automotive world!

While we aren't expecting the official debut of the 2015 Ford Mustang until the actual 50th Anniversary on April 17, 2014, we've already prepared for the overwhelming amount of hype that will surround the 'Stang's 50th birthday! To kick it all off, we've got the Ford Mustang 50th Anniversary Logo that is sure to adorn all types of anniversary merchandise. The official 50th Anniversary Mustang Logo features the iconic galloping horse above the bold "50 Years" type. Hopefully you like it, because you can expect the Mustang's Anniversary Logo to adorn an inconceivable number of products; hats, t-shirts, keychains, bottle openers, etc.

The original Mustang actually made its debut at the New York World's Fair, and with the New York Auto Show underway this week, Ford is set to kick-off the build up to the debut of the next generation 'Stang. Much still remains unknown, but we do know that the automaker is definitely planning something huge for the celebration, perhaps a limited edition anniversary edition? We'll have to wait and see!

If you can't wait that long to put the pedal to the metal, check out our 2013 Ford Mustang Brochure, and make it even more affordable with our Ford Mustang Rebates! Stop by to take one for a spin, Brighton Ford is located at 8240 Grand River Avenue, just north of I-96 in Brighton. We are a family owned and operated business that strives on customer satisfaction. For more information on Brighton Ford visit BrightonFord.com or give us a call at (800)-836-8206.