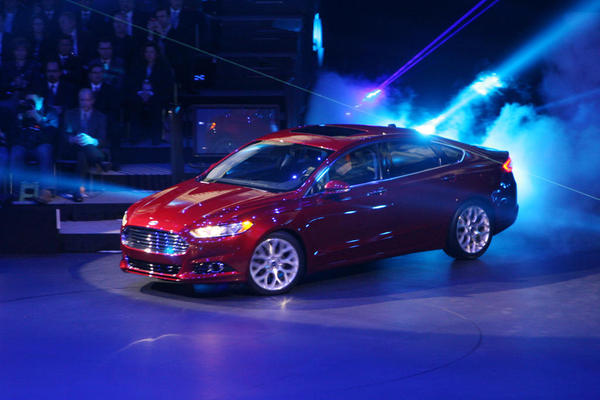 Ford’s revamped mid-size sedan received significant acclaim at the 2013 Brand Image Awards for their second-generation version of the Fusion. The award was based on data from Kelley Blue Book’s 2013 Market Intelligence Brand Watch study— Kelley Blue Book has rated the Fusion a 9.2/10 for interior and exterior design. The study analyzes and measures the perception of KBB.com shoppers towards new vehicles on the market.

While the exterior is striking and is almost certain to turn heads, the 2013 Fusion also combines sleek looks with energy efficiency, boasting 34 mpg on the highway. Upgraded fuel economy options are available for 2013 as well, including a hybrid and a plug-in hybrid model. In addition, Ford received this year’s award for Best Car Styling for their work on the Fiesta, Focus, Fusion and Escape.

Learn about our Ford Fusion A Plan Price and Ford Fusion Rebates to save on the 2013 Ford Fusion! Brighton Ford is located at 8240 Grand River Avenue, just north of I-96 in Brighton. We are a family owned and operated business that strives on customer satisfaction. For more information on Brighton Ford visit BrightonFord.com or give us a call at (800)-836-8206.