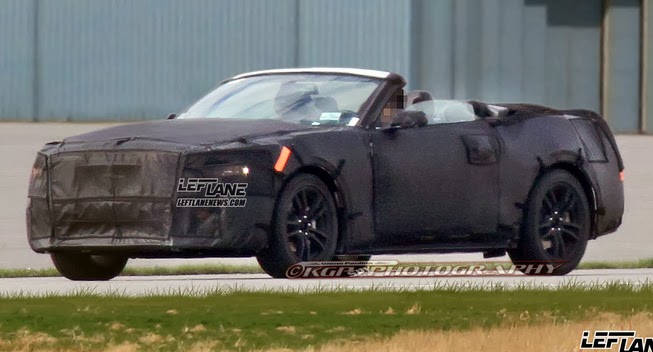 BRIGHTON, Mich. - The automobile universe hasn't stopped talking about the 2015 Ford Mustang - especially now that Ford has announced the pony car will be released in December (4 months earlier than previously thought). Everything from prototypes to computer-generated images have leaked on the internet, and now we are getting a sneak peek at the 2015 Ford Mustang convertible!

This topless version of the Ford's pony car was spotted in Michigan, not far from the testing grounds.  Although it was heavily camouflaged, the vehicle still appears to be inspired by the Evos concept car look in the headlight and grille region.

The sneak peek also confirms that the 2015 Ford Mustang convertible will come with a soft top, as opposed to the heavy folding metal hardtop that was once rumored. This is more fitting for the new model, since Ford has hinted that they will be drastically reducing the weight on the new Mustang.

As for how the Mustang looks under the hood, the exact specifics will be released in December when Ford does the big reveal. However, it's believed that it will keep the current 3.7-liter V6 and 5.0-liter V8 engine options, and a 2.0-liter turbocharged four-cylinder will be offered as well.

For now, this sneak peek of the 2015 Ford Mustang isn't revealing too much. However, Mustang lovers won't have to wait too long to catch a glimpse at the updated model, as the vehicle will debut in December! To hold you over until then, stop by our Commerce Township Area Ford Dealership! We have a great selection of New Ford Cars - specifically the 2014 Ford Mustang. So come on by and let us help you into a vehicle you'll love!