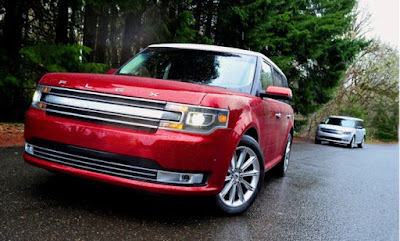 Ever since it first burst upon the scene for the 2009 model year, the Ford Flex crossover has been a favorite of families looking for a vehicle with a spacious cabin, as well as attention-grabbing good looks. Those are two areas where the Ford Flex shines the brightest. Thanks to its squared-off design, it would be rather hard not to notice this vehicle out on the open road. In addition, the Flex’s boxy frame allows for a roomy interior that can comfortably seat up to seven people. The Ford Flex is also relatively affordable, as the 2017 model carries a starting MSRP of $30,025.

What’s New for the 2017 Ford Flex?
There are three new exterior colors offered with the Flex for the 2017 model year. Those hues are White Gold, Blue Jeans, and Burgundy Velvet tinted clear coat. Furthermore, the rear-console refrigerator that was offered on last year’s Flex is not available with the 2017 model.

Click here to continue reading article on The News Wheel

Posted by Brighton Ford at 2:30 AM