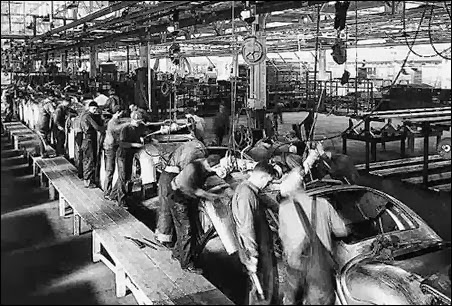 BRIGHTON, Mich. - Although Henry Ford did not invent the moving assembly line, he did forever revolutionized the automobile-building industry by perfecting the process in his factories. Now, a century after the first car (a Model T) rolled off the line, Ford's moving assembly line is turning 100!

It was October 7, 1913 in Highland Park, MI when that historic Model T was the first vehicle to come off of Ford's moving assembly line. Although the Model T had already been on the market for 5 years, it was the first time that the vehicle had been made that quickly - all thanks to the new building process. The increase in speed was significant, taking the production time from around 12 hours per car to about 3 hours. As the assembly line became more developed, the time decreased further to 90 minutes and eventually, at the peak of production, a Model T was being built every 24 seconds.

This assembly line was also responsible for a huge decrease in prices, allowing a majority of Americans the opportunity to finally be able to afford the Ford vehicle. Before the moving assembly line, the Model T cost $600. By 1916, prices dropped to $360 and continued to drop as the years passed and the assembly line improved. 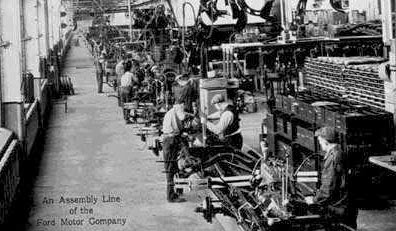 Before the moving assembly line, factory workers would assemble the car one at a time on top of sawhorses. As they sat atop the sawhorses, they would rotate the vehicle from station to station with the chassis remaining in one place. They would continue to rotate until the vehicle was completed. When they introduced the moving assembly line - primitive compared to what we have today - they used a winch and a rope that stretched across 150 feet, which allowed 140 factory workers to install the different parts as the chassis was dragged across the floor.

Ford's moving assembly line is turning 100 and it's truly amazing to look at how far vehicle production has come. If you'd like to take a look at one of today's moving assembly line products, come on by our dealership today! We have a great selection of New Ford Trucks and New Ford Cars - all of which are beautifully built and reasonably priced. So stop by and see us today!