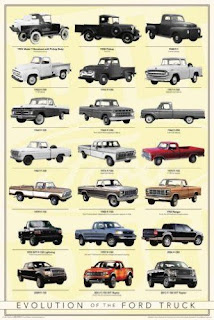 The F-series, best known for the popular F-150, has been America's best-selling truck for the 40 consecutive years since its launch. Ford says it's sold more than 26 million since the model line came out in 1977.

The F-series has also been the best-selling vehicle of any kind in America for 35 years, the company said.

The evolution of the F-series followed changes in how people perceived and used trucks. Like blue jeans, pickup trucks went from being something appropriate only for work to being a style and lifestyle statement of their own.  Americans weren't just using trucks as farm tools anymore, to haul around pigs and hay bales. Trucks were being used increasingly for commuting to office jobs, family trips to Walmart and McDonald's, shuttling the kids to school and tailgate parties at football games.

Click here to view the Evolution of the Ford F-150