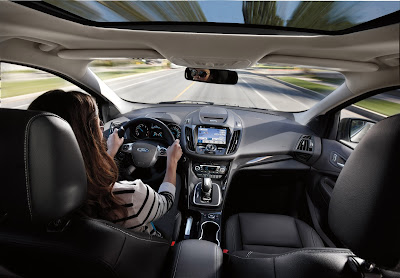 BRIGHTON, Mich. - Ford Motor Company launches its new SYNC 3 system to help drivers keep their eyes on the road and off their smartphones. The all new entertainment system is full of new features that include conversational voice-recognition, intuitive smartphone-like touchscreen, easier-to-understand graphical interface and all-around faster performance. What is so exciting about the new SYNC 3 system is that it will launch in two of Ford's most popular vehicles: the 2016 Ford Escape and Fiesta. The Ford Escape is the auto maker's highest-volume vehicle, while the Fiesta is the brand's most affordable model.

Some other great new features for the SYNC 3 system include the integration of AppLink for an easier way to control smartphone apps, Siri Eyes-Free capability for Apple iPhone users, software updates via Wi-Fi and enhanced 911 Assist for subscription-free emergency calling in the event of a severe crash or accident. Check it out!

Looks pretty simple and easy to use, huh? We think so! Ford Motor Company launches its new SYNC 3 system to help drivers conquer the roads without putting themselves or other drivers at risk. One of our favorite features is the fact that updates are seamlessly downloaded via Wi-Fi, so no fumbling around trying to update your system– it does it on its own! Want to test drive any of our current Escapes or Fiestas? Stop by! Brighton Ford is located at 8240 Grand River Ave. just north of I-96 in Brighton. We are a family owned and operated business that strives for customer satisfaction.