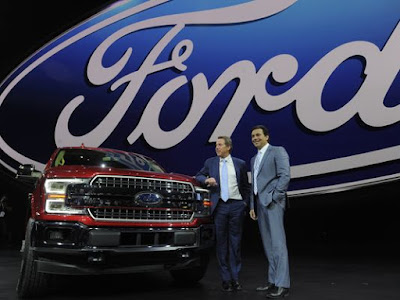 The Ranger and Bronco will return to the Ford stable.

The Ranger will come back to North America in 2019, and the Bronco will be brought back in 2020 and sell globally.

Both will be produced at the Michigan Assembly Plant.

“We’ve heard our customers loud and clear. They want a new generation of vehicles that are incredibly capable, yet fun to drive,” said Joe Hinrichs, Ford’s president of The Americas. “Ranger is for truck buyers who want an affordable, functional, rugged and maneuverable pickup that’s Built Ford Tough. Bronco will be a no-compromise midsize 4x4 utility for thrill seekers who want to venture way beyond the city.”

Ford discontinued the Ranger, a small truck, in 2011, but newer versions are sold in 180 markets around the world. They currently are built in Argentina, South Africa, Thailand and Nigeria.

The Bronco, which drew national attention as the getaway vehicle for O.J. Simpson, was discontinued in 1996 after being built for 30 years at Ford’s plant in Wayne. Its successor, the Expedition, was also built in Wayne before moving to Kentucky Truck. Ford showed a Bronco concept at the 2004 North American International Auto Show in Detroit.

Ahead of its Monday auto show reveal, the automaker announced Sunday a refreshed F-150 that it will bring to market.

The new pickup ditches the three-bar grille that has been Ford’s signature design for over a decade, and brings a diesel engine to the light-duty truck lineup (previously offered only in heavy duty) for the first time in its nearly 70-year history.

The 2018 F-150 is due in showrooms in the fall 2017, but the diesel version won’t be available until the summer 2018. Built in England by Ford, the diesel will deliver impressive towing ability and is the same oil-burner found in Land Rover’s SUVs.

The F-150 will be the first light-duty truck to get pre-collision assist with pedestrian detection as well as adaptive cruise control which can come to a complete stop – then accelerate again. The 2018 model will also have an available Wi-Fi hot spot that can accommodate up to 10 devices. The F-150 will come with Apple CarPlay and Android Auto smartphone compatibility