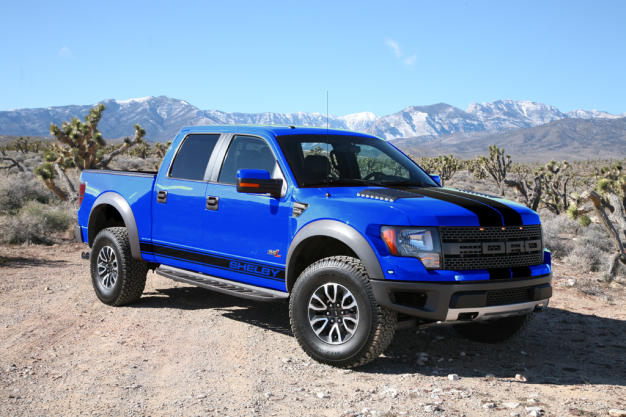 The Shelby Raptor starts off with a 2013 Ford F-150 SVT Raptor, which then goes through one of Shelby's characteristic extreme makeovers. The already impressive six-speed automatic transmission boasting 434 pound-feet of torque, is upgraded into a 575 horsepower monster after Shelby American gets their hands on it. The 6.2-liter V-8 engine is supercharged, skyrocketing the horsepower from 411 to 575 hp using a 2.9-liter Shelby/Whipple supercharger. The exhaust and cooling systems are totally reworked to handle extreme conditions by installing a custom Borla exhaust and upgrading the cooling system with a specially designed package.

The Shelby Raptor comes outfitted with a custom leather interior, a unique Shelby serial number, and eye-catching graphics. The initial demand for the Shelby Raptor was so high that the original plan was to cap production at 100 vehicles per year. Shelby American rolled out the Ford F-150 SVT Shelby Raptor and then announced that they will be producing 400 additional Shelby Raptors a year because of the high number of incoming orders. The upgrades to the 2013 Ford F-150 SVT Raptor start at $17,995, not including the sticker price of the original vehicle.

Brighton Ford is a great option for purchasing a vehicle, arranging financing, or servicing your vehicle. Serving Brighton, surrounding communities, and the Holly Area with New Ford Cars, we are also a Brighton and Holly Area Used Car Dealership. We have the people, the products, and the experience to meet your needs. Brighton Ford is located at 8240 Grand River Avenue, just north of I-96 in Brighton. We are a family owned and operated business that strives on customer satisfaction. For more information on Brighton Ford visit BrightonFord.com or give us a call at (800)-836-8206.