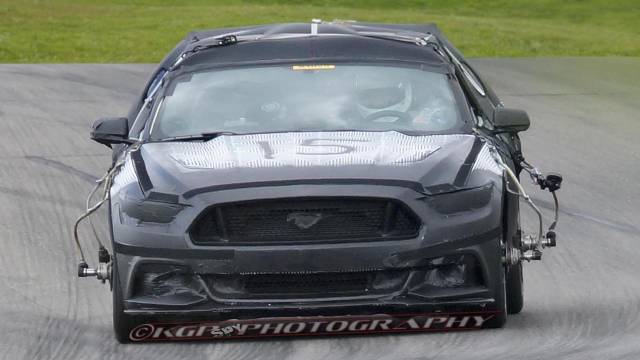 BRIGHTON, Mich. - Everyone is talking about the newest Mustang model, hoping to catch glimpses of what the next generation pony car will look like. While we were able to see a completely covered 2015 Mustang out on the street, it's finally been spotted without some of its covering. The 2015 Ford Mustang goes face first in the above photograph, finally giving Mustang lovers a peek at what's to come. 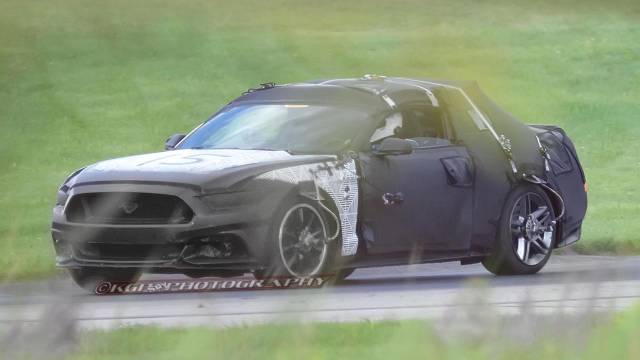 The 2015 Ford Mustang goes face first and it looks great! The front fascia is much more aggressive and menacing, as it has been influenced by the Evos concept and the 2014 Mustang. Using a nice combination of both vehicles, the new face of the Mustang is tough and fantastic.

As for other changes to the vehicle, it's hard to report much else. However, it is known that the 2015 Mustang will come with a base 3.7-liter V-6 engine, while the 2015 Mustang GT will receive an upgraded 5.0-liter V-8. It has also been revealed that the Mustang will be lighter and smaller - about 15 inches shorter in length, half a foot narrower, and 400 pounds lighter, to be exact.

Unfortunately, Ford is keeping the specs of the 2015 Ford Mustang tightly under wraps. While leaks appear every once in awhile, we won't know all the details until it is finally revealed on Ford's 50th anniversary next year. We do however have a variety of 2014 Ford Mustangs that you are more than welcome to come and take for a test drive. Our Novi Area Ford Dealer can take care of all your vehicle needs - from Used Car Loans to New Ford Cars, we've got you covered.